I’ve recently leased a new 2015 Nissan Murano.  Since having the car, it’s made more trips (and mileage) back and forth to the dealer than anything else.  First let me be clear: I love the Murano.  It’s been a total pleasure to drive.  But there have been a couple of needed tweaks:

One of the taillight segments wasn’t working. The problem was a losse or broken connector which was repaired in a couple of minutes.

Next was a loose piece of chrome trim.  This was due to “loss of tension in the clips” (according to the write-up.  Anyway, another minor issue that was…or more correctly, is being addressed.

Probably the most exasperating is the paperwork for the lease.  While the folks at the dealership are a pleasure to work with, it seems like the folks at the leasing company keep changing the forms–or requirements for the forms–and we’ve had to return twice to re-sign them after the initial signing.

But to end, let me repeat this is a great vehicle.  And at my age, it’s nice having a car that’s smarter than I am. Okay, that’s not saying much.  Then again, it’s a shame all drivers don’t have such a vehicle; most of them seem pretty stupid these days. 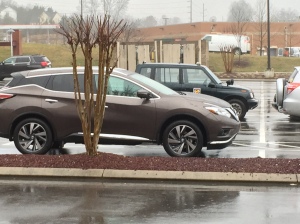